Year 5 have had the best day, finding out all about the Anicent Greeks, with a hands-on workshop led by Penelope and Andros. Penelope was trying to convince us that the city-state of Athens is the best place to live in the Ancient Greek world, whereas Andros was adament that Sparta is far better!

We've found out that while there were similarities between the city-states, they're actually very diffierent. Sparta was famous for its soldiers, whilst Athens led the way in developing democracy and studying.

Have a look at our photos to see the fabulous day we have had, role-playing and exploring what life was like in Ancient Greece.

This half term, Year 5 are writing their own labour for Heracles to complete, based on their own mythical creature. Today, we began to write our climax - where Heracles begins his battle with the monster, and for a moment, it looks like he is going to lose!

As you can see from the photo, Year 5 children were working extrememly hard! I can't wait to read our final stories, and share them with you all.

This half-term, year 5 are focusing on Greek Myths, and more specifically, Heracles. During our writing lessons, children will be planning and writing their own labour for Heracles to complete, based on their own Mythical Creature.

This week children have begun to plan their labour. First they were tasked with creating their own mythical creature. They began by sketching ideas in their art books. This later resulted in them creating charcoal drawings of their creature.

Today, they began to plan their story. It was important to consider what would make their monster difficult to defeat, and the children had wonderful ideas.

We can't wait to share their final story with you.

During our topic 'why does the world need great inventions?' year 5 created bridges with moving parts.

We then shared our bridges with Year 4, where they were able to pretend to be ships to test if our bridges created enough space for them to pass under! Year 5 were also tasked with explaining how they created their bridge, while using subject-specific vocabulary. Year 4 learnt a lot!

It was a wonderful experience, and all children involved loved sharing their amazing ideas.

A visitor visted Year 5, and taught them how to make these wonderful bridges! They used cardboard, screws, string, eyes and screw drivers to create their designs.

Each bridge was able to move, and they could carry a weight of 500g!

It took half a day for children to create their bridges. It was very exciting!

What do you think of Year 5's wonderful bridges?

I couldn't fit all of the wonderful non-chronological reports onto one blog!

Here are some more.

Last half term, the children completed their own research on different inventions. These varied from Victorian inventions, such as the printing press, to more modern inventions such as video games.

They used their information to create non-chronological reports, which they then transferred to pic collage.

I know that I learnt some new facts from reading these, did you?

To launch our new english topic, the children were shown a 'Mystery Object.' Their task, was to work in groups of four to draw the object.

They were only allowed to take 'sneak peeks' of the object, so it was a very challenging indeed!

How well did they do?

Today, we were fortunate enough to take part in an 'Anti-bullying workshop.'

We had lot's of fun, playing games to help us understand the differnet forms of bullying - and how to prevent them.

Here are some pictures of us acting out different bullying scenes - we learnt a lot!

Today we carried on building our robots. Some of the groups have even finished the building process!

Next week we will begin to program the robots, so that they can move with the use of IPads. It's very exciting!

5CB have been very active for Children in Need today!

We began the morning by completing the 'Big Morning Move' with Joe Wicks (I don't know about the children...but I was absolutely exhausted afterwards!) If you want to have another go, you can follow the link here: https://www.bbcchildreninneed.co.uk/schools/primary-school/fundraise-with-joe-wicks/

After lunch, we took part in some sports activities outside, with our new playground markings. The children absolutely loved completing our updated daily mile.

Today, we have been practising how to multiply numbers by 10, 100 and 1000. We used place value charts to practice, before challenging ourselves with some tackling word problems!

Tomorrow we will tackle dividing numbers by 10, 100 and 1000. What will we have to do differently?

What could you do at home to practice?

Today, Year 5 started a very exciting adventure on the skills of building a robot!

For the next 6 weeks, we will be building robots (using the help of Ipads), that will eventually play football. We are very excited and greatful of the help from Manchester City, where a coach will come to school each week to support us.

We will keep you updated with each stage of the creating process - today was the first of many.

For our Connected Curriculum launch on 'Why does the world need great inventions?' The children worked in teams of 3-6, to create a bridge using only Spaghetti and Marshmallows.

The rules they had to abide by were:

- You can ONLY use spaghetti and marshmallows

- You cannot use resources from other tables

- Your bridge can be any design

- EVERYONE in your team must work together

When their time was up, we tested each bridge to see if it could hold the weight of a toy car for 10 seconds, without falling over and without anyone touching it. If your team succeeded, you earnt yourself five house points each!

I am delighted to announce that every team managed to create an bridge that held the weight of the toy car. They all worked well together, and tested a variety of designs.

Which was your favourite bridge design?

...so many wonderful designs, that they couldn't all fit into one blog!

Can you find yours here?

Also check out our updated header for our blog page - where all of these beautiful designs are able to shine!

We have really enjoyed our William Morris art project! We celeberated our beautiful designs by turning them into a digital wallpaper! They look AMAZING!

We used oil pastel and then felt to create our tile, then chose our favourite medium to use as the base of our wallpaper. We then used Pic Collage on the iPads to duplicate and crop our images (countless times) to create these magnificent designs.

Can you find yours? (if it's not here, check the next blog!)

Today, year 5 were fortunate enough to take part in BBC's Live Lesson, focussing on a growth mindset, and wellbeing.

We explored our own emotions, and how sometimes they can be difficult to express. Children looked at a variety of techiniques that allow them to understand what they are feeling and how to express this, for example, writing poetry. We also had the opportunity to explore a growth mindset, and how we can try to incorporate this in every day learning (remember, you can't do it yet!) . Finally, we were shown the mindfulness 'hand' breathing technique.

Who knew it was so easy to regulate your breathing through only using your hand?

I can confidently say, that we have been left with some fabulous new ideas of what to do when we're feeling overwhelmed.

If you want to learn more about the BBC live lesson, or watch it again at home, this is the link you need:

A Virtual Reality Trip to Space!

We all used virtual reality headsets to explore our Solar System, and learn amazing facts about the different planets around us.

It was very exciting!

On Tuesday, we held an Art Exhibition to raise money for Refugee Action by selling framed prints of our Greek landscapes artwork, inspired by Nikolas Georgoudakis. As part of our study of Greece, we found out that many refugees go to Greece in order to find safety from their own countries where they may experience war or religious persecution. We watched some CBBC Newsround interviews with two boys who are refugees in Greece and found out a bit about their story. We thought it would be a brilliant idea to try and help refugees who are finding safety in Manchester by raising money for this charity.

We managed to raise a grand total of...

At the beginning of the Summer Term, we will have a representative from Refugee Action visit the school to meet the children and collect the donation.

Thank you SO MUCH for your support in helping us raise money for this brilliant charity.

Next week we are hosting an Art Exhibition!

Next week we are hosting an Art Exhibition!

This half term we have been finding out all about Greece, and part of that study involved us exploring how Greece has received many refugees who are unable to live in their own countires safely. We have also discussed how some people are seeking safety in the UK and, more sepcificailly, Manchester - we thought it would be a wonderful opportunity for us to show our support and care to our community by giving a donation to Refugee Action, a charity which helps refugees build safe and hopeful lives in Manchester.

The children have suggested that they could raise money for Refugee Action by selling their amazing Greek landsacpe art work at the exhibition. We have framed prints of  their landscapes, and they look incredible. Our hope is that you would be willing to purchase your child's framed work for a small cost (suggested donation: £3-5). All proceeds will be given to Refugee Action.

The exhibition will be on Tuesday 2nd April straight after the KS2 Easter competition (which we expect to finish around 11.15am) in our classroom - we really hope you can make it and see the fabulous work your child has been doing this half term.

We are almost at the end of an exciting half term!

This term we have been studying Modern Greece. We began the topic by tasting a variety of Greek cuisine (we were all very surprised by how delicious the salmon was!). We then explored the geographical side of Greece, and sketched some Greek buildings.

In English we have been focussing on a Midsummer Nights Dream. We began the topic by using drama to act out the role of different characters. We eventually turned this into a magnificent selection of diary entries. We will end this topic by writing a sonnet or two (inspired by the 154 sonnets Shakespeare wrote), and have begun to plan this today.

In maths we have been focussing on fractions, decimals and percentages. This was a challenge for everyone to begin with, but we soon mastered the skill.

This week we are focussing on measurements, more specifically, converting measurements (both imperial and metric).

Finally, in P.E we have been practising gymnastics. We have now mastered the headstand, and have been creating a sequence involving bridges, balances and rolls.

Next week we will end the term by hosting an art exhibition.

We hope to see you there!

Will it complete the circuit?

Can you remember which of these materials were which? 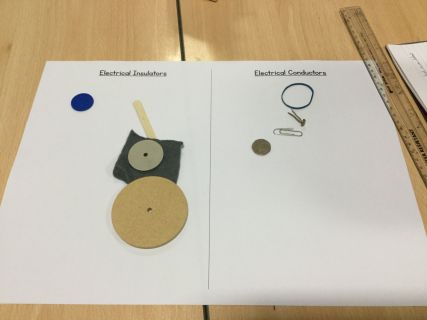 We have been using chatterboxes to help us practice equivalent fractions and decimals.

We have been exploring complementary colours to create paintings of Tower Bridge. Can you spot which pairs of colours we used?