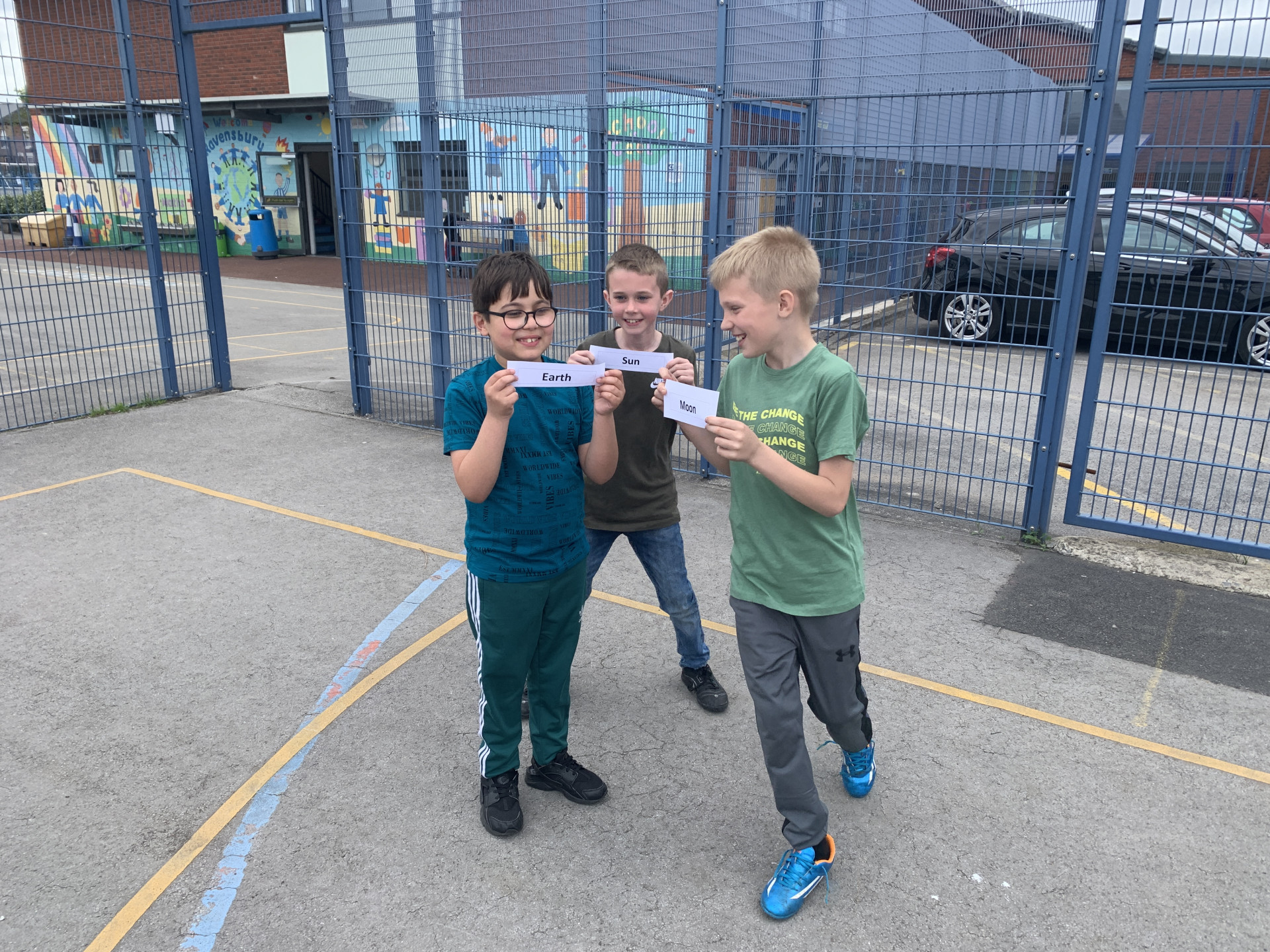 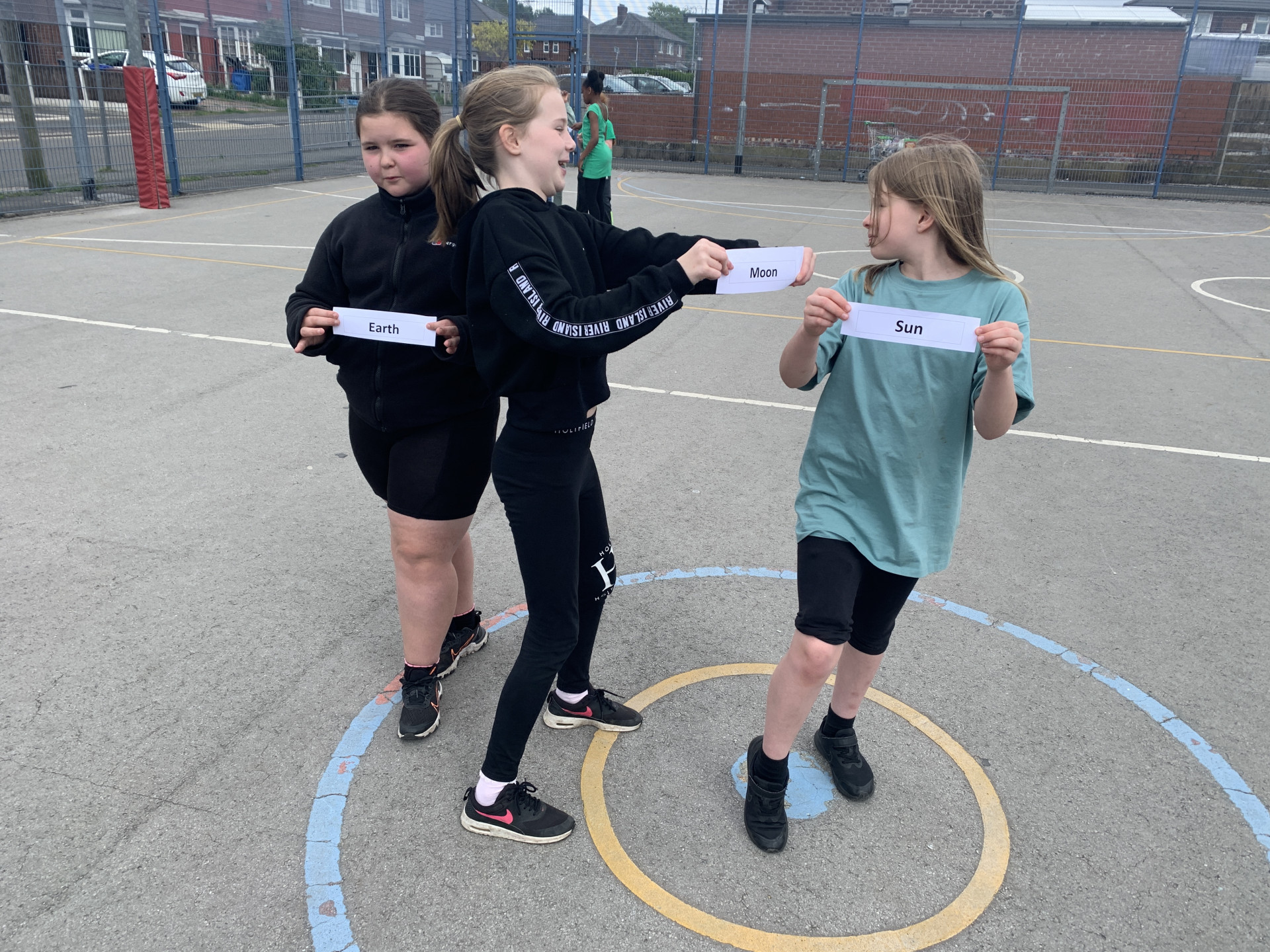 During maths today, we tried out a new mental arithmetic starter. The children loved it as you can change the speed, difficulty level and type of question. Please feel free to try it out at home 5CR!

5CR have been working hard on their writing to produce an adventure story about a rescue team arriving on a planet to respond to an SOS call. Initally, many struggled to understand the story line and which part they would be writing but they have really tried to respond to feedback to improve their work. As part of this, we introduced them to an idea called 'marketplace.' During this activity, children move around the room, reading each others' work. They can then find the owner of the work to have a conversation about one of two things - they might have found a way to help them improve their work or they might magpie an idea to include in their own writing. The class worked beautifully together and there were some fabulous examples of peer support.

In art, we have produced some Greek landscapes inspired by the work of Nikolas Georgoudakis. He was a talented illustrator and painter and he grew up on the island of Kos. We learned lots of new skills such as drawing using perspective. We thought about drawing objects close up and in the distance using the vanishing point. We also practised 3D drawings and blending different shades to create the sea and the sunset. Look at our beautiful artwork.

Friday 18th March was Red Nose Day! It was lovely to see all the red around school as everyone came in dressed to raise some money for charity. The theme for the day was Try Something New. As it was also recently St. Patrick's Day, we decided in year 5 to combine the two and give the children a chance to have a go at limericks! Although the jokes in some of the poems passed many of the children by, they did enjoy acting them out!

5CR's ICT topic this half term is making animations using stop motion technology. Our first lesson was all about exploring the first types of animations which included Thaumotropes. The traditional design shows a two-sided disc with a cage on one side and a bird on the other. When spun, our brains can only see one image - a bird in a cage. The children had a go at making their own with different designs and did a great job!

What a fantastic day 5CR had for World Book Day!

We started the day with a look at the fabulous costumes we had in our phase during a parade on the playground. Thank you for all the effort so many of you put in to creating the characters. Mrs. Caine and Miss Gallery came dressed as characters from the Midnight Gang but we also had lots of princesses, Willy Wonka and Helena from a Midsummer Nights Dream to name just a few!

We then had a big reveal of the authour we would be studying. It turned out to be Malorie Blackman! Everyone quickly got on with reseraching who she is, her books and her achievements. We focused on reading a book called Cloudbusting. Every chapter is written in a different type of poem but it tells the story of a boy in school who was being bullied.

Inspired by one Malorie's chapters - we wrote some Haikus about love. It turns out that we have some wonderful poets in our class!

It really was a great day!

5CR had a go at acting out parts of a Midsummer Night's Dream in their English lesson this week. They particularly enjoyed showing Helena's feelings when she found out that Hermia did not want to marry Demetrius!

What a half term we have had in year 5. We managed to pack in so much learning : fractions and lots of work with decimals in maths, the human life cycle in science, Greek myths in English and lots of lots of learning about Ancient Greece in our connected curriculum work. Every child in the class has worked incredibly hard. Let's hit Spring 2 with just as much energy!

At the end of our connected curriculum learning, we brought together all the work we'd done in order to put on a mini-Olympics. The children took part in four athletics events - the shotput, the javelin, the long jump and a relay race. Everyone did amazingly well and we discovered an athlete in our class who has been hiding in plain sight!

Well done 5CR - you've had a great half term!

Year 5's topic in Autumn 1 was Victorian inventions. As part of that, we were planning to build some bridges. Unfortunately, we had a few resource problems so we couldn't complete that part of the topic before Christmas. We've sorted it now though so today 5CR spent most the morning building bridges with a raised portion for a toy car to cross. They had to use lots of tricky skills such as measuring and cutting accurately but most of them got there in the end!

5CR really do enjoy their Science lessons. This week, we were thinking about how we change as we get older. We compared the similarities and differences between us as children and us as babies. The class definitely enjoyed trying to figure out which baby was which child. The photo of Mrs. Caine as a baby really confused them!

Year 5 had a fantastic time during their Greek super learning day. They investigated Greek artefacts, learned about the ancient Greek cities of Sparta and Athens and made some Greek tiles. By the end of the day, most children agreed that they'd rather live in Athens. Sparta seemed like a very harsh place to live!

Happy Christmas everyone or Happy Holidays to those who don't celebrate it. Mrs. Ratcliffe, Miss. Gallery and Mrs. Caine have all thoroughly enjoyed our first term with you all. We hope you have enjoyed it too. You have worked incredibly hard and really deserve this two weeks off to rest.

Stay say everyone and we really hope that we can see you all back in school in January.

Please see below for the holiday homework. The children can decide to present their learning about the Victorians in any way that they would like. We can't wait to see the results in January!

We have been practising our coding skills using 'Blockly' to help us programme a robot. We were challenged to make the robot move forwards and backwards, make its eyes change colour, make it make a sound and move the kicker. We then applied all the skills we had learned to have a robot football match!

Last week was our maths week at Ravensbury. We celebrated maths in lots of different ways including competing to be the TT Rockstar Stars! We are yet to find out who the winners are but we can not wait!

Each year group was also given a maths related book to enjoy together. Ours was called If by David J Smith. It had lots of interesting information about the world, presented in ratio and percentages. We especially enjoyed discovering how many new inventions have occured in the last 100 years!

As part of our Connected Curriculum, Year 5 have started learning about inventions. For our launch, we were challenged to work in pairs to build a structure strong enough to hold a toy car. Not all of us were successful but we all had a lot of fun anyway! 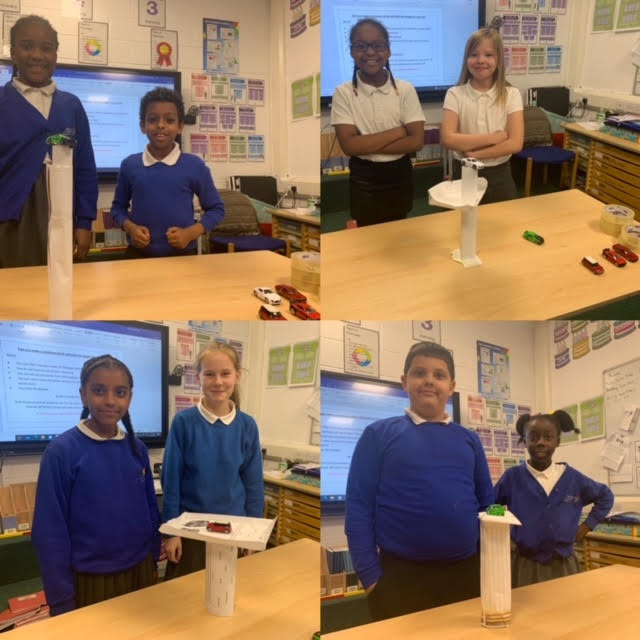 In the first experiment, we were investigating the effect that friciton had on shoes. We measured the amount of force was required to move a shoe across grass, concrete, wood, lino and carpet. Then the children identified the surface which created the most friction with the shoe - most children found that it was the carpet because it was a rougher surface.

In the second experiment, we made paper helicopters and dropped them several times from the same height. Then, we added paperclips one at a time to see if the increased weight made a difference to the speed it fell to the floor. The children found that more weight meant greater speed because it caused the helicopter to spin more which increased the air resistance.

In art, we have been studying the work of William Morris, who was an artist who lived during the Victorian times. His work is often recogniseable by his use of images found in nature. He wanted to bring nature into people's homes in the cities during the Industrial Revolution and his work could be found in repeated patterns on wallpaper.

We produced our own William Morris inspired tiles. Aren't they eye-catching?!

This week in maths, we will be learning about the properties of 3D shapes. Take a look at this website to give you some practice at identifying them!

In Year 5, we have been learning about the Victorians. To find out more about what life was like for children working in the factories in Victorian times, we went on a visit to Quarry Bank Mill which was a cotton factory. We found out about the numerous injuries children suffered from after working with heavy machinery and the long hours they had to work. We decided that we are very lucky to go to school instead!

5HW love learning Spanish! They have asked for some online games to be made available so they can practice at home.

Year 5HW are going to be supporting Portugal in the Euro 2020 football competition. Have a look at our fantatsic fact files and posters that we have created! 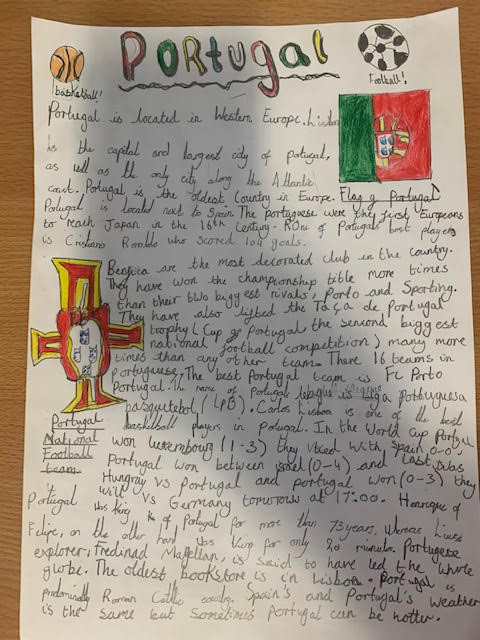 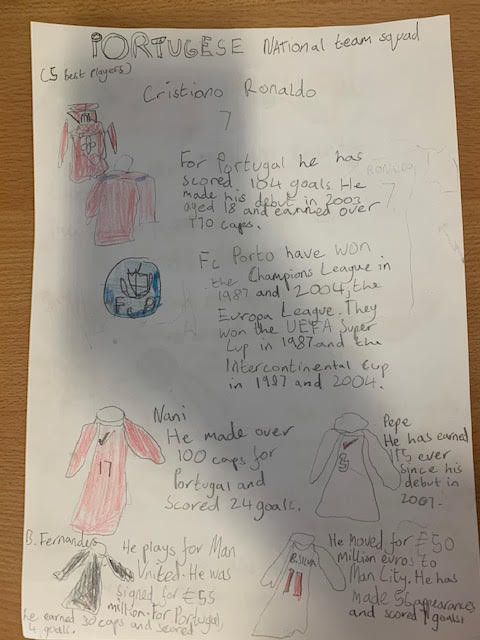 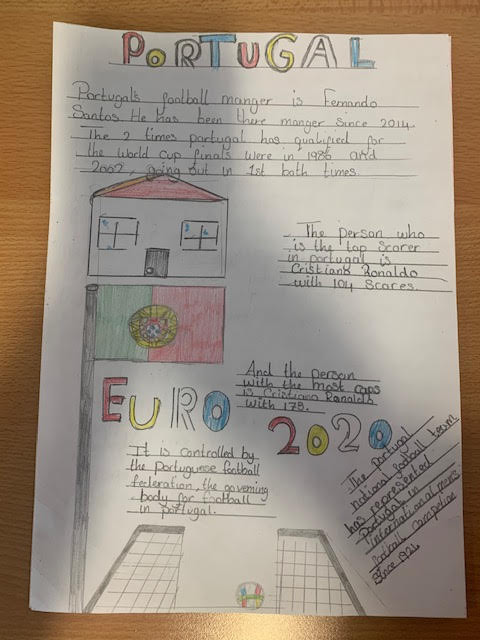 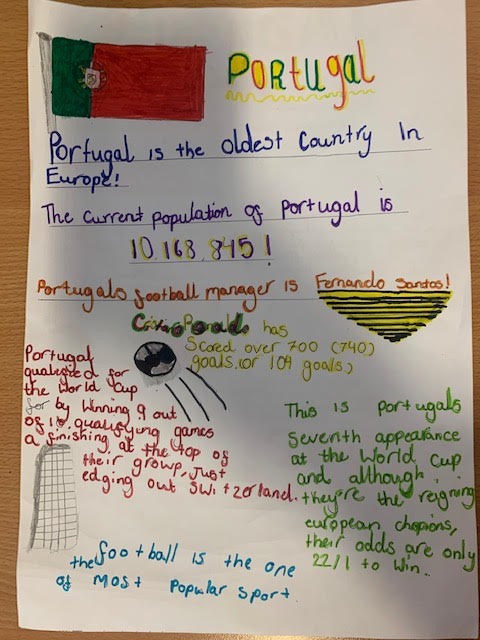 Year 5 have been looking closely at the links between fractions, decimals and percentages. In order to help understand, 5HW have asked for some online learning games and activities to help.

Click on the links below and practice the tasks!

Also, some of 5HW have been asking for help telling the time! Even though it is something we practice in school, it can still be very confusing. Try the activities below for a boost of knowledge!

Keep up the hard work 5HW!